The Gendarm Path (Gendarmstien) is an 74km long route that follows the coastal border between Denmark and Germany. We plan on walking, running and cycling the path in chunks. This blog post covers the length from Sønderborg via Vemmingbund around the peninsula of Broager Land and back to Sønderborg. 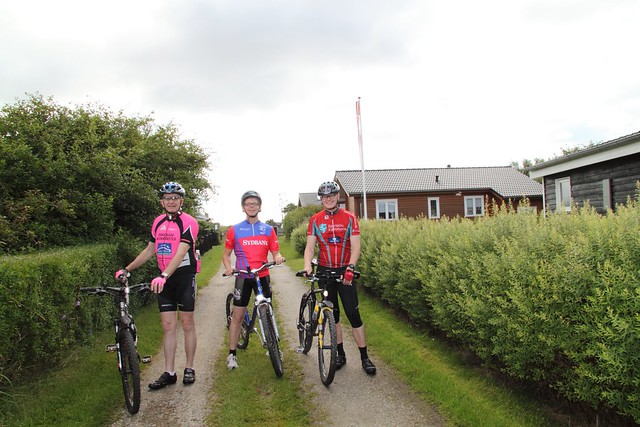 From Vemmingbund the first section is tarmac road as there is a section of The Gendarm Path not right on the water here. Then you turn left towards the water going through Gammelmark Strand camp ground before you make it to the water. This is the first difficult section as you have a bit of beach, a narrow path and a steep set of stairs to climb. 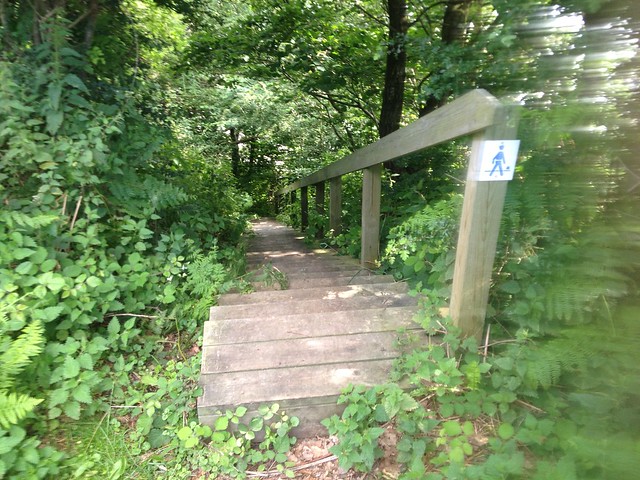 Once you’ve carried up the bike the hill continues so onwards and upwards! 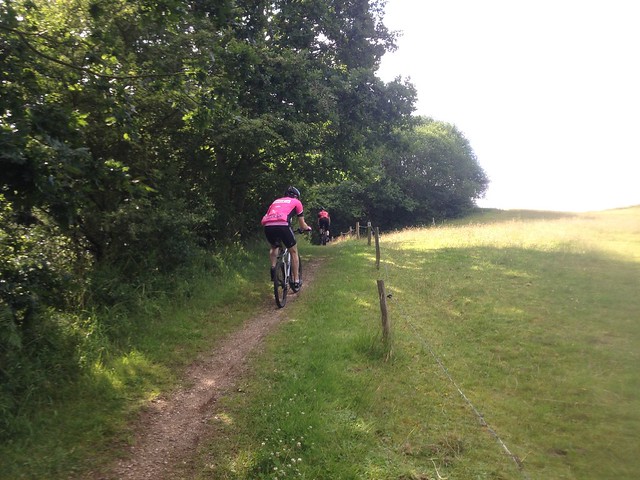 As you go along here getting up on the hill you get magnificent views of the area. However I was lagging behind at this point so there is no photos to show you the great view.
We continued up and down steep hills until at the top of the last hill before we made it to Broager Strand camp ground. 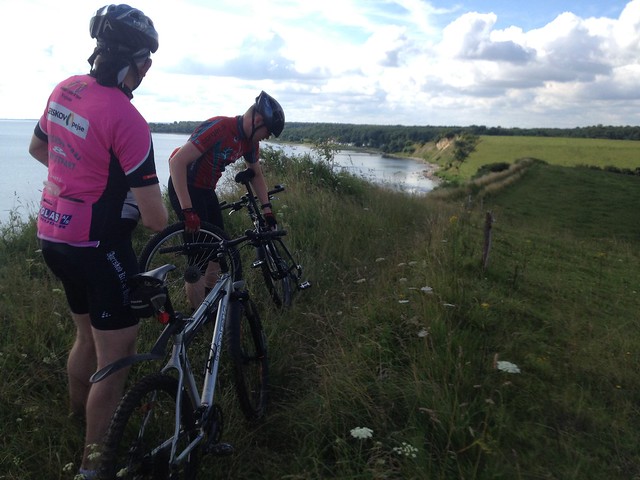 Here Jan got a flat tire so while him and my dad changed inner tube I could take some photos. I attempted to do a 360 Photsynth image from here but unfortunately it turned out a bit dark:

With a new inner tube in place we could continue down the slope and onto tarmac again. Again we had a short detour inland before going back down to the water and through the forrest called Kobbelskov. After Kobbelskov we got all the way down to the water with a section of the path on the beach with fairly big stones. Not an easy place to cycle but interesting challenge as long as it was not for too long.

We continued until we reached a parking lot and took bearings of the situation. The path we just came from can be seen behind Jan. He looks concerned about the beach section coming up. 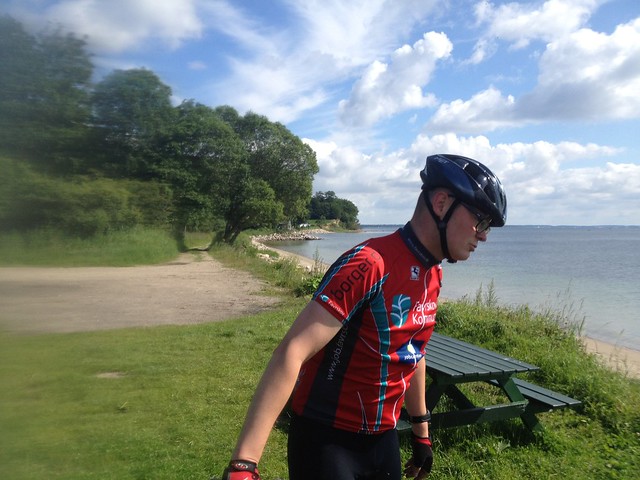 From here on around the bend of the peninsula the Gendarm Path follows the beach with soft sand, medium and big stones and sections where you have to climb over big rocks. Not easy with a bike so we opted for the easier route inland again until we were past the wind mills. Here’s the beach path we did not follow. 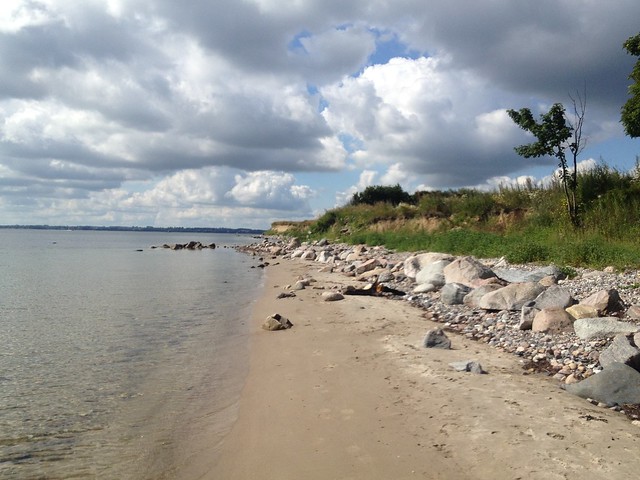 At Skeldemark we went back down to the water again and now we got a short section riding right on the beach with fairly even sized stones so it was doable to stay on the bike and keep moving forward. 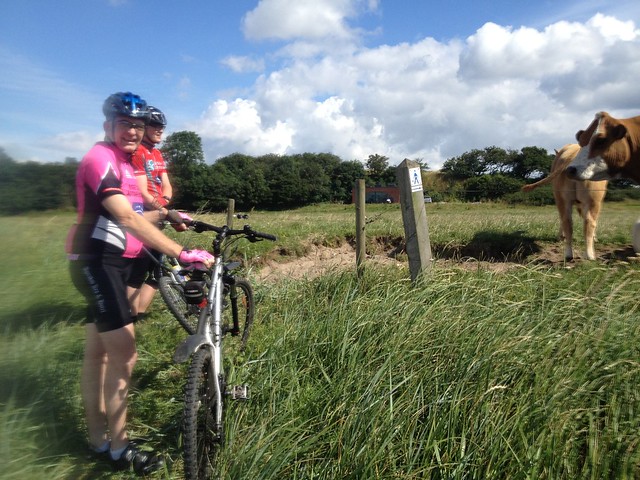 At a point on the beach the Gendarm Path took a turn to the right across a field. The inhabitants of the field didn’t seem too fussed about three guys in bright lycra outfits so we opened the gate, got our bikes in, and closed the gate again. We gave the cows a wave but they were not really interested in us as we rode across their field. 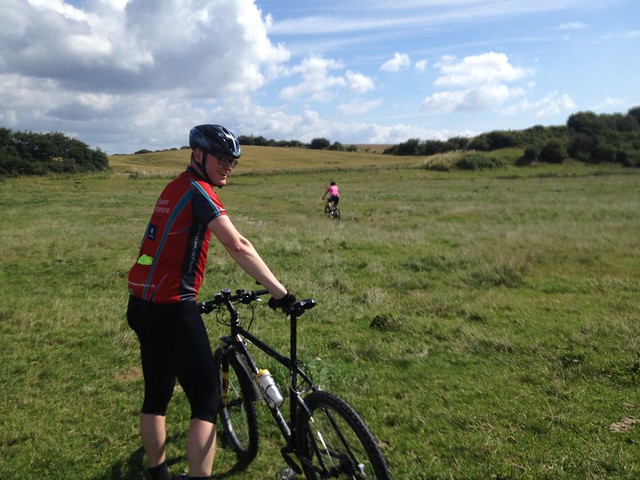 We followed the Gendarm path inland to Gammelgab (Literally translates to ‘Old Yawn’) which looked more cozy than the name implies.

We went back down to the water for another patch of beach and gravel road riding through the courtyard of a farm and then across another cow field before we made it to Brunsnæs.

From here it was an easy drive to Broager with a single hill that was too steep for any of us to drive up.

In Broager we left the Gendarm Path and turned eastwards towards my parents rented cottage in Vemmingbund. Here we left my dad and Jan and I continued home to Sønderborg.

The route is really great. I was amazed at the scenery and bike challenges I have on the door step here. As a mountainbike route it is really challenging with the various surfaces and hills.
This section is great for doing on foot without too big a load or on mountain bike. Other types of bikes will probably have problems.